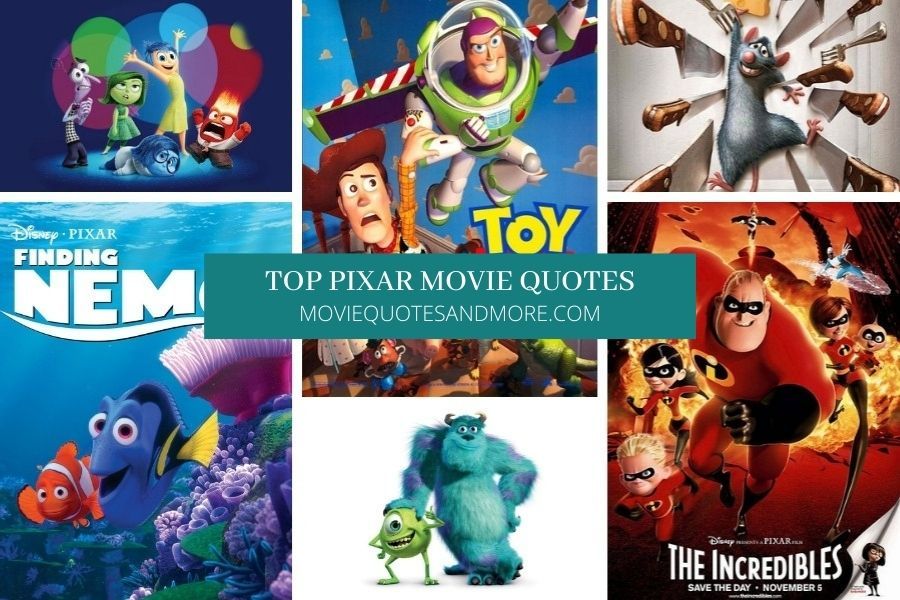 As we shared our top Disney movie quotes, we had to include our list of top Pixar movie quotes (in alpha order) as its trusted companion!

Merida: Some say fate is beyond our command, but I know better. Our destiny is within us. You just have to be brave enough to see it.

Hopper: First rule of leadership. Everything is your fault.

Heimlich: Someday I’ll be a butterfly, and then everything will be better.

Mater: Ain’t no need to watch where I’m going, just need to know where I’ve been.

Lightning McQueen: I’m telling you, you got to help me! Don’t leave me here! I’m in hillbilly hell! My IQ’s dropping by the second! I’m becoming one of them!

Mater: I’m happier ‘n a tornado in a trailer park!

Sally: [referring to the repaving] It looks terrible.
Lightning McQueen: Well it matches the rest of the town.

Mater: I knew it! I knowed I made a good choice!
Lightning McQueen: In what?
Mater: My best friend.

Miguel: We may have our differences, but nothing’s more important than family.

Dory: [to Nemo] I remembered something! That’s not possible, is it? Okay, is it like a picture in your head and then you think I’ve seen this before? I’ve just used the word before which means I’m remembering something! What was I talking about?

Dory: I suffer from short-term memory loss. It runs in my family. At least I think it does… Hm. Where are they?

Dory: What is it with men and asking for directions?
Marlin: I don’t want to play the gender card right now. You want to play a card, let’s play the “let’s not die” card.

Bruce: [reciting] I am a nice shark, not a mindless eating machine. If I am to change this image, I must first change myself. Fish are friends, not food.

Marlin: I can’t afford any more delays, and you’re one of those fish that causes delays. Sometimes it’s a good thing. There’s a whole group of fish. They’re delay fish.
Dory: You mean you don’t like me?
Marlin: No, of course I like you. It’s because I like you I don’t want to be with you. It’s a complicated emotion.

Dory: [to Marlin] Please don’t go away. Please? No one’s ever stuck with me for so long before. And if you leave, if you leave, I just, I remember things better with you. I do, look. P. Sherman, forty-two, forty-two, I remember it. I do. It’s there. I know it is, because when I look at you, I can feel it. And I look at you, and I, and I’m home. Please, I don’t want that to go away. I don’t want to forget.

Gurgle: [sees Bloat eating dirt off their tank] Bloat, that is disgusting!
Bloat: Tastes pretty fine to me.
Gurgle: Doesn’t anyone realize? We’re swimming in our own sh…?
Peach: Shhh!

Poppa: Sometimes you got to get through your fear to see the beauty on the other side.

Edna: This is a hobo suit, darling. You can’t be seen in this. I won’t allow it. Fifteen years ago, maybe, but now? Feh!
Bob Parr: Wait. What do you mean? You designed it.
Edna: I never look back, darling. It distracts from the now.

Bob Parr: Weren’t you in the news? Some show in, Prayge, Prague?
Edna: Milan, darling. Milan. Supermodels. Huh! Nothing super about them. Spoiled, stupid little stick figures, with poofy lips, who think only about themselves. Feh! I used to design for gods!

Bob Parr: No matter how many times you save the world, it always manages to get back in jeopardy again. Sometimes I just want it to stay saved! You know, for a little bit? I feel like the maid, I just cleaned up this mess! Can we keep it clean for ten minutes!

Helen Parr: Your identity is your most valuable possession. Protect it.

Bing Bong: Take her to the moon for me, Joy.

See more Inside Out Quotes

SOX: Congratulations, Buzz. That was utterly terrifying, and I regret having joined you.

Luca Paguro: I can’t do it without you.
Alberto Scorfano: But you’re never without me. The next time that you jump off a cliff, or tell Bruno to quit bothering you, that’s me.

Mike: You and I are a team. Nothing is more important than our friendship.

Mike: You know, I am so romantic. Sometimes I think I should just marry myself.

Mike: Can I borrow your odorant?
Sulley: Yeah, I got Smelly Garbage or Old Dumpster.
Mike: You got Low Tide?
Sulley: No.
Mike: How about Wet Dog?
Sulley: Yep. Stink it up.

Sulley: Hey, Mike, this might sound crazy but I don’t think that kid’s dangerous.
Mike: Really? Well, in that case, let’s keep it. I always wanted a pet that could kill me.

Mike: Roz, my tender, oozing blossom, you’re looking fabulous today. Is that a new haircut? Come on, tell me it’s a new haircut, isn’t it? It’s got to be a new haircut. New makeup? You had a lift? You had a tuck? You had something? Something has been inserted in you that makes you look…

Randall: [referring to Boo] Wazowski! Where is it, you little one-eyed cretin?
Mike: Okay, first of all, it’s “cree-tin”. If you’re going to threaten me, do it properly. Second of all, you’re nuts if you think kidnapping me is going to help you cheat your way to the top.

Randall: Say hello to the Scream Extractor.
Mike: Hello. Hey, where are you going? Come on, we’ll talk! We’ll have a latte!

Sulley: I act scary, Mike. But most of the time, I’m terrified.
Mike Wazowski: How come you never told me that before?
Sulley: Because we weren’t friends before.

Sulley: [to Mike] You’re not scary. Not even a little bit. But you are fearless.

Barley Lightfoot: On a quest, the clear path is never the right one.

Gusteau: If you focus on what you left behind you will never see what lies ahead.

Gusteau: You must not let anyone define your limits because of where you come from. Your only limit is your soul.

Gusteau: What I say is true. Anyone can cook, but only the fearless can be great.

Anton Ego: In many ways, the work of a critic is easy. We risk very little, yet enjoy a position over those who offer up their work and their selves to our judgment. We thrive on negative criticism, which is fun to write and to read. But the bitter truth we critics must face, is that in the grand scheme of things, the average piece of junk is probably more meaningful than our criticism designating it so. But there are times when a critic truly risks something, and that is in the discovery and defense of the new.

Django: When all is said and done, we’re all we’ve got.

Remy: Change is nature, Dad. The part that we can influence, and it starts when we decide.

Linguini: I’ve never disappointed anyone before because nobody’s ever expected anything of me.

Remy: If you are what you eat, then I only want to eat the good stuff.

Counselor Jerry A: So what do you think you’ll do? How are you going to spend your life?
Joe: I’m not sure. But I do know, I’m going to live every minute of it.

Woody: [finds Buzz in a dress, sat with two headless dolls] What happened to you?
Buzz: One minute you’re defending the whole galaxy, and suddenly, you find yourself sucking down Darjeeling with Marie Antoinette and her little sister.

Woody: I think you’ve had enough tea for today. Let’s get you out of here Buzz…
Buzz: Don’t you get it? You see the hat? I am Mrs. Nesbitt!
Woody: [opens Buzz’s helmet, slaps him across the face with his detached arm] Snap out of it, Buzz!
Buzz: You’re right. I’m sorry. I am just a little depressed, that’s all. I can get through this.
Buzz: [breaks down again] Oh, I’m a sham!

Woody: You! Are! A! Toy! You aren’t the real Buzz Lightyear! You’re an action figure! You are a child’s play thing!
Buzz: You are a sad, strange little man, and you have my pity.

Woody: That wasn’t flying. That was falling with style!

Slinky Dog: I may not be a smart dog, but I know what roadkill is.

Andy: Now Woody, he’s been my pal for as long as I can remember. He’s brave, like a cowboy should be. And kind, and smart. But the thing that makes Woody special, is he’ll never give up on you, ever. He’ll be there for you, no matter what.

Mr. Potato Head: You would not believe what I have been through tonight!

Ken: No one appreciates clothes here, Barbie! No one.

Ken: Barbie, come with me! Live in my Dream House! I know it’s crazy! I know we’ve just met! Aw, heck, you don’t know me from GI Joe. But when I look at you I feel like we were…
Ken, Barbie: Made for each other.
Barbie: Yay!

Barbie: Authority should derive from the consent of the governed, not from threat of force!

Woody: [as he watches Andy leave] So long, partner.

Rex: [watching Woody and Bo as they are driving away] Does this mean Woody’s a lost toy?
Buzz Lightyear: He’s not lost. Not anymore. To infinity…
Woody: …and beyond

Meilin: We’ve all got an inner beast. We’ve all got a messy, loud, weird part of ourselves hidden away. And a lot of us never let it out. But I did. How about you?

Young Ellie: [to young Carl] You don’t talk much. I like you!

Charles Muntz: Adventure is out there!

Russell: That might sound boring, but I think the boring stuff is the stuff I remember the most.

Carl Fredricksen: This is crazy. I finally meet my childhood hero and he’s trying to kill us. What a joke.

Captain: I don’t want to survive. I want to live.