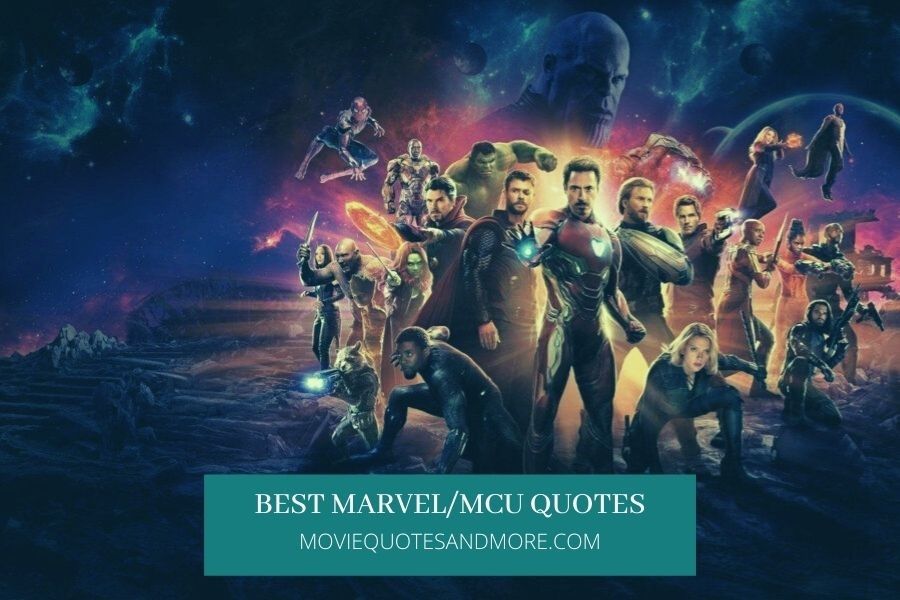 Here is our list of the best movie quotes, and now including the Disney+ shows/series, in alpha order from the Marvel Cinematic Universe…

Dr. Hank Pym: Are you ready to redeem yourself?
Scott Lang: Absolutely. My days of breaking into places and stealing shit are done. What do you want me to do?
Dr. Hank Pym: I want you to break into a place and steal some shit.

Dr. Hank Pym: Hiya, champ, how was school today?
Scott Lang: Oh, ha, ha, ha. Alright, get your jokes out now. Can you fix the suit?
Hope van Dyne: So cranky.
Dr. Hank Pym: You want a juice box and some string cheese?
Scott Lang: Do you really have that?

Kang: I can get you home, and give you more time, if you help me. So, what’s it going to be, Ant-Man?

Tony Stark: [to Loki] There’s no throne, there is no version of this, where you come out on top. Maybe your army comes and maybe it’s too much for us, but it’s all on you. Because if we can’t protect the Earth, you can be damned well sure we’ll avenge it.

Nick Fury: You never know. You hope for the best and make do with what you get.

Steve Rogers: You know, I keep telling everybody they should move on and grow. Some do. But not us.

T’Challa: Maybe we can still heal you.
Erik Killmonger: Why, so you can just lock me up? No. Just bury me in the ocean with my ancestors that jumped from the ships, because they knew death was better than bondage.

Natasha Romanoff: It’s funny. My whole life, I didn’t think I had any family. Turns out I got two.

Steve Rogers:  [referring to Bucky] I’m sorry, Tony. You know I wouldn’t do this if I had any other choice. But he’s my friend.
Tony Stark: So was I.

Dr. Abraham Erskine: [to Steve] Whatever happens tomorrow, you must promise me one thing. That you will stay who you are. Not a perfect soldier, but a good man.

Peggy Carter: [to Steve] The world has changed and none of us can go back. All we can do is our best, and sometimes the best that we can do is to start over.

Yon-Rogg: Turn off the light show, and prove, prove to me, you can beat me with…
Carol Danvers: [Carol uses her photon blast on him and blasts him away] I have nothing to prove to you.

Dr. Stephen Strange: I’m not ready.
The Ancient One: No one ever is. We don’t get to choose our time. Death is what gives life meaning. To know your days are numbered. Your time is short.

Doctor Strange in the Multiverse of Madness (2022)

Wanda Maximoff: You break the rules and become a hero. I do it and I become the enemy. That doesn’t seem fair.

See more Doctor Strange in the Multiverse of Madness Quotes

Thena: When you love something, you protect it. It is the most natural thing in the world.

The Falcon and The Winter Soldier (TV Series 2021)

Sam Wilson: Every time I pick this thing up, I know there are millions of people out there who are going to hate me for it. Even now, here, I feel it. The stares, the judgment. And there’s nothing I can do to change it. Yet, I’m still here. No super serum, no blond hair, or blue eyes. The only power I have is that I believe we can do better.

See more The Falcon and The Winter Soldier Quotes

Drax: I can barely see.
Drax: [Groot releases glowing particles from his body to light their way]  When did you learn to do that?
Peter Quill: I’m pretty sure the answer is “I am Groot.”

The Guardians of the Galaxy Holiday Special (2022)

See more The Guardians of the Galaxy Holiday Special Quotes

Kate Bishop: You know, some people have actually called me the world’s greatest archer.
Clint Barton: Yeah? Are you one of those people?

Betty Ross: [referring to Bruce in his Hulk state] In the cave, I really felt like it knew me. Maybe your mind is in there, it’s just overcharged and can’t process what’s happening.
Bruce Banner: I don’t want to control it. I want to get rid of it.

Tony Stark: The truth is, I am Iron Man.

Tony Stark: You know, the question I get asked most often is, “Tony, how do you go to the bathroom in the suit?”
Tony Stark: [pauses and closes his eyes for a moment] Just like that.

Pepper Potts: Am I going to be okay?
Tony Stark: No, you’re in a relationship with me, everything will never be okay.

Loki: I am Loki of Asgard. And I am burdened with glorious purpose.

Arthur Harrow: There’s chaos in you.

Kamala Khan: I always thought I wanted this kind of life, but I never imagined any of this.

Nick Fury: This is my war, alone. And I’m the last person standing between them and what they really want.

Bruce Banner: The triggers are anger and fear.
Jennifer Walters: Those are like the baseline of any woman just existing.

Xu Wenwu: Names are sacred, Ruiwen. They connect us not only to ourselves, but to everyone who came before.

Peter Parker: Listen, Fury, this all seems like big-time, you know, huge, superhero kind of stuff. And, I mean I’m just your friendly neighborhood Spider-Man, sir.
Nick Fury: Bitch, please. You’ve been to space.
Peter Parker: I know, but that was an accident.

Thor: [to Jane] You’re ancestors called it magic, and you call it science. Well, I come from a place where they’re one and the same thing.

Loki: [onboard Malekith’s ship Thor tries to figure out how to fly it] I thought you said you knew how to fly this thing.
Thor: I said, “How hard could it be.”

Odin: Even when you had two eyes, you’d see only half the picture.
Thor: [referring to Hela] She’s too strong. Without my hammer, I can’t.
Odin: Are you Thor, the God of Hammers? That hammer was to help you control your power, to focus it. It was never your source of strength

Wanda Maximoff: We are an unusual couple, you know?
Vision: Oh, I don’t think that was ever in question.

Verussa: My word. A monster. Masquerading as one of our own. Desecrating a sacred night!